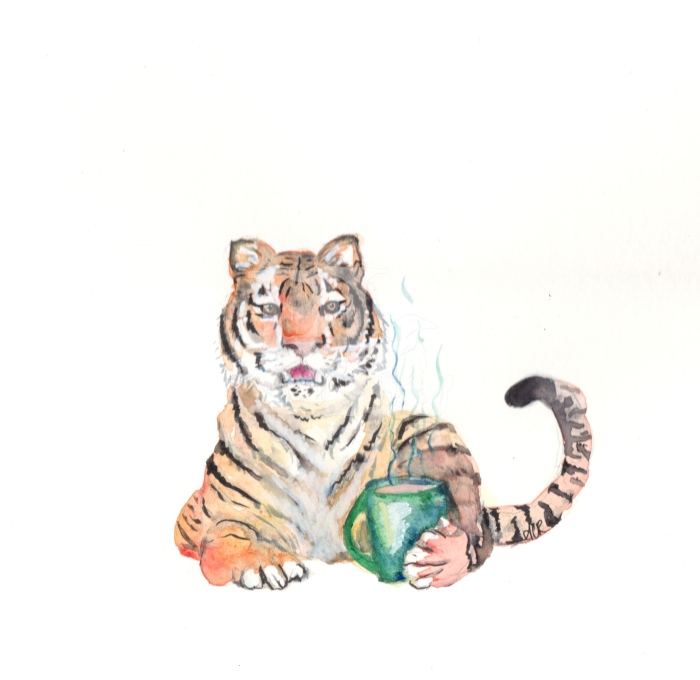 I really love drawing animals. When I’m stuck for ideas, I find some reference pictures and draw an animal.

And then…..and then I give them a coffee cup.

I don’t know why.

It just makes me happy.

So, here they are (most of them, anyway). I hope they make you happy too!

If you aren’t a coffee person, think of them as giant, steaming, mugs of tea.

Several of these are up on my Redbubble shop already–the rest are pending! I’m also hoping to get some of them as stickers for sale on my Etsy. But that’s a project I’m *just* beginning. Let me know in the comments which ones you think would be the best stickers.

What animals would you like to see cherishing a nice steaming cuppa?

It’s been a quiet year at the barn. What with 2020 and all. I mean, it’s a quiet little place to start with, but especially quiet the past 12 month.

But then came the fake goose dog.

I noticed the dog when I drove in. A little black silhouette of a German Shepherd type dog slowly rotated in the gentle breeze at the end of the drive way. Closer examination revealed he was part of a goose deterrent effort, and he was on the way to one of the fields we frequent.

Knowing how distrustful Midas is of changes in his familiar landscape, I decided we’d come see the fake dog in hand before riding. I didn’t think it’d be a big deal, Midas likes dogs. So I tacked up completely and then led him down the driveway.

This isn’t the first time I’ve done that, but Midas saw the dog and was interested immediately. Midas likes dogs…but there was something off about this one. We went up, he warily sniffed it, shifted around, looked at it with the other eye. I made sure to touch it and wobble it so he could see it was safe. He wasn’t thrilled about it, but he was calm, and so I led him back up the driveway to the woodpile to get on.

While I fussed with the girth and stirrups, he looked over his shoulder at the fake dog. Then he looked again, more alarmed. Then he began to snort, and looked again, shifted his feet nervously.

Then I realized what was happening.

This is not normal behavior for inert objects–things he’s confirmed with his own nose are not living.

Without getting on I led him back to the fake dog, telling him it was just cardboard turning in the wind. Midas did a lovely little piaffe the whole way there, and then when we arrived he swung his rear at the fake dog menacingly. He didn’t kick, though, because he’s a hunt horse, and you don’t kick dogs.

I was surprised and delighted to see him trying to scare it away. Midas is the responsible guard horse at the barn. He’s the one who stands watch when everyone else naps. He’s attentive and watchful, and while he likes dogs,

I tried to reason with him, and honestly he was calmest walking in a circle around the haunted dog, but being in sight of it was, overall, NOT OK. The Cardboard Weeping Angel Dog that would surely attack if he blinked.

With a sigh I decided to start my ride in the ring–from the ring we could still catch glimpses of the fake dog, but Midas considers the ring as SAFE, so he’s pretty brave in there. We had a great ride.

I caught him eyeing the dog now and then.

We cooled out outside the ring–and went past the Haunted Dog, giving it a wide berth and goggly eyes so it wouldn’t try anything as we went past.

The next week, the Haunted Dog was still there.

Midas still DID NOT LIKE the Haunted Dog. But then I noticed that there is another Haunted Dog in sight of the pastures. The horses had probably been watching it all week. We still gave it a wide berth, but apparently this was a peaceable Haunted Dog that wasn’t going to eat him.

The Haunted Dogs have been patrolling for geese for weeks now, moving around the yards every couple days, turning in the wind.

We ignore them now.

Midas keeps a casual eye on them in case they’ve just been luring us all into a false sense of security. 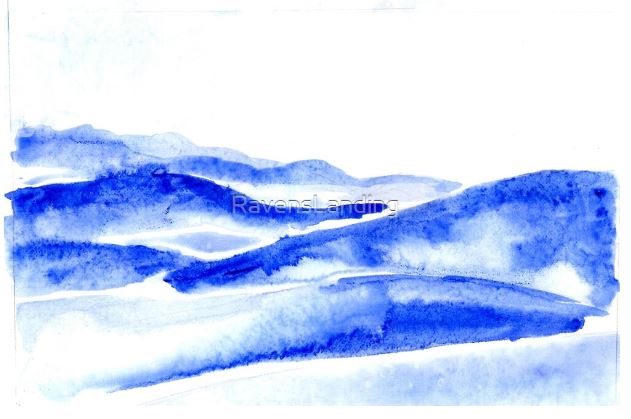 I did some sketching on my tablet–it’s been a while. Apparently, i’m better at it than i remember. This looks way better than I remember art on the tablet looking. I’ll have to mess around some more!

The CEO of Tee Public had a great reminder for artists, so I thought I’d share it here:

“Today, you don’t need to be Pablo Picasso and you don’t need to have something poignant to say. But you are an artist. You do have a sword to wield. Can you push through anxiety and find the space to be creative? Can you find your voice and whisper to us, a joke, an idea, or a memory of some better time? “

Read a book, look at art, make art…get out those coloring books, the beads you were going to do something with…If you can’t get outside, you can find solace in art or escape in stories. We’ll do our best to keep you supplied!

I painted this when I first got masking fluid. I’m still trying to learn how to use it. And putting riders on horses is startlingly difficult. Perhaps because I think I know what it looks like, but the eye and the brain don’t actually communicate as well as I think.

I am trying to push myself to explore composition more and think creatively.

What? Think creatively? In a painting? I know.

i did really enjoy manipulating the masking fluid and brush flicks for the flagging tail. I think there must be Arabian lines in this horse 😉

I’ve always liked Arabians–not just because they are spectacularly gorgeous, but also the legends around them, their endurance, and of course their loyalty. Marguerite Henry’s King of the Wind was also, definitely, instrumental.

Actually, I learned a lot from that book. I read it repeatedly, and the details of how Agaba treated Sham, the care he took to groom and saddle for the comfort of the horse, has definitely influenced how I treat horses. I try to always be kind and respectful when handling a horse. When you do that, they take it much better when you correct them for not being kind and respectful.

This is actually a character from my novel. If you read The River Rebellion on zarecaspian.com you’d know him, Trinh Kegan. His armor should be golden, but artistic liberty dictated bloodstone for this piece.

If you don’t know what you’re looking at, this is probably a weird picture. I was commissioned to paint an adventuring party portrait for a friend–it is VERY difficult to fit 7 people in a single portrait! There is a fighter/barbarian, a wizard, a sorcerer, a druid, a ranger, a paladin and a bard. So, basically everything 😉 if you’re familiar with tabletop roleplaying games.

I made this with inktense, brushpens, watercolors, and masking fluid. Oh, paint pen and metallic pens by kuretake, also. Layer upon layer upon layer. It easily took me 8 hours.

I don’t know why wordpress isn’t letting me rotate these pictures, so, sorry you’ll have to crane your head. But you can get a feel for the layers of detail easily enough.

This was done in August, but it was a Christmas gift so I couldn’t say anything about it till now 😛

Processing…
Success! You're on the list.
Whoops! There was an error and we couldn't process your subscription. Please reload the page and try again.
Loading Comments...